What is a sports influencer?

What is a Sports Influencer?

Whether you’re a footballer regularly scoring goals in the Premier League, former sports stars who have now become celebrities, or simply exceptional athletes who are at the top of their game right now, using your passion, dedication and talent to promote events and companies is a big business.

Here at Sport & Motion, we regularly use our large database of sports influencers to help promote brands.

But just what is a sports influencer, and how can they help you in your next promotional project?

What Makes a Sports Influencer?

A sports influencer is often someone who has excelled in a certain field.

From gymnasts to weightlifters, if you have a story to tell and guidance to provide, then you have everything you need to become an influencer.

As an influencer grows a following, they will find many brands wanting to help them promote their products.

While the emergence of social media has changed advertising, sports influencers have been used to market products for many years.

Let us head back to 1984, and the Air Jordan. This was a shoe that became synonymous with one of one of the greatest basketball players of all time, Michael Jordan.

While the terminology may have been different, this is an early example of a sports influencer.

In modern times, sports influencers have many more ways to reach an audience, and this means that more people have the opportunity to become one.

Sports influencers are no longer just the biggest names in the best leagues in the world, but they are also content creators, freestylers, sports models, up and coming athletes, and much more.

Our database has a varied range of some of the most talented sports influencers around, meaning if you are an influencer, it could be a perfect place to find work.

Alternatively, if you are a brand looking for influencers to help boost your brand, we can pinpoint the exact individual for you.

But what can an influencer bring to your promotional campaign?

How to Use Sports Influencers for Promotional Videos and Events

Sports influencers often have a story.

Where they came from and their journey to get to where they are now is an inspiration, and this is why they are such a hit when promoting brands.

A key to choosing the right individual for your job, is to focus on what you are selling. For example, we’ve worked on projects with Marcus Rashford and Anthony Joshua.

Both of these are superstars in their own sport, but they would be best used selling different products. Out of the two, you wouldn’t pick Marcus Rashford to promote your boxing gloves, for example.

We also carried out this case study with stars of the WSL.

This was a great project, and these influencers are a huge influence on wa growing number of up and coming female athletes.

The key to influencer marketing is choosing a person your audience can relate with and gain inspiration from.

We’ve worked with major brands such as Adidas and Nike, and when promoting these brands, we use sports influencers who suit the products in question.

Influencers also bring their own followers, so using a famous sports star, such as Jamie Redknapp, in a promotional video is a great way of increasing your advertising reach.

From athletic build, talent, back story, and more, each sports influencer is different, but if you choose the right one, you are sure to hit the right note with your audience (a great way to do this through sports activations) and potentially open your brand up to a much wider audience.

When it comes to the top five sports influencers in the world, it is open to interpretation, but here are some that are definitely near the top of the list:

How to Become a Sports Influencer

If you want to become a sports influencer, then don’t be put off by the names mentioned above.

There is a place in the influencer industry for people of all talents and fitness levels.

The key is to post content regularly and share your story. If you’re training for something in particular or want to showcase a competition win, then let the world know and before you know it, you may build a following and yourself become a sports influencer.

The key thing to do when you’re growing is to try and work as much as possible. That’s why it is such a great idea to sign up with a team such as Sport & Motion.

Through becoming a member of our database, you are sure to find work at events and in promotional videos which is a great way to further build your name and brand.

We work with a wide range of sports talents. From sports models and body doubles, to influencers and beyond, we work with some of the biggest and best stars in the business, and many up-and-coming talents as well.

If you want to become part of this team, or you are seeking sports influencers to use to promote your brand or event, then get in touch with our team today. 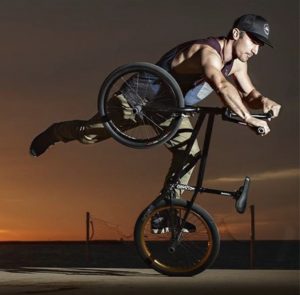 6 Different Sports you Can Use at Your Next Sports Event

If you’re an athletic or sporting brand, a great way to promote

Title: Kick It Out